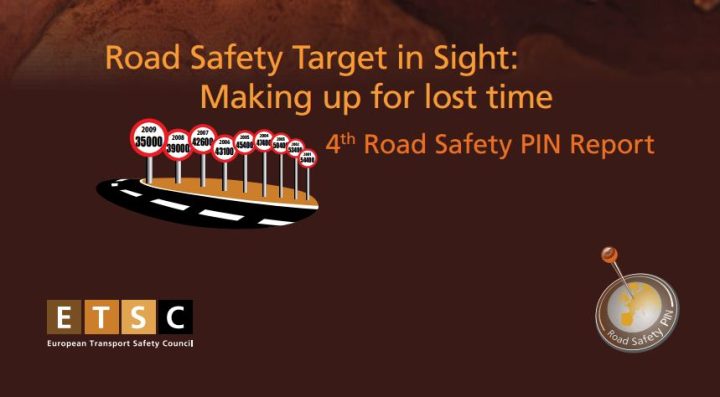 This 4th PIN Report provides an overview of European countries’ performance in five areas of road safety. It builds on the three previous Road Safety PIN Reports published in June 2007, 2008 and 2009. It shows how countries have progressed in reducing road deaths and serious injuries since 2001. It also shows how countries perform in tackling the three main killers on the roads: speeding, drink driving and failure to wear a seat belt.

These rankings have been carried out during the fourth year of the Road Safety Performance Index (PIN) between September 2009 and June 2010. They cover 30 countries, all 27 Member States of the European Union, together with Israel, Norway and Switzerland.

Progress toward the target

Since 2001, road deaths have been cut by 36%in the EU27. In the EU15, the countries who originally set the target, road deaths have been cut by 42%. In the EU10, the group of countries who joined in 2004, reductions have been slower but have gained pace in the last two years to reach 27%in 2009. Comparison of developments up to 2009 show that Latvia, Spain, Portugaland Estoniaachieved the best reductions. Latviarecorded an outstanding 54%, Spain52%, Portugaland Estonia50%. If progress continues this year, these four countries will have reached the target by the 2010 deadline. Franceand Lithuania are following closely and, if they step up their efforts, might just reach the target on time. All other countries have progressed to a lesser extent. Only in Romania(and in Malta where the small number fluctuates widely) were the numbers of road deaths higher in 2009 than in
2001. In 2009, road deaths were cut by 11%across the EU compared to 2008. This has been the best yearto-year reduction since 2001. The good news about progress is coming from the Central and Eastern European Countries. Slovakia(36%), Lithuania(26%) and Estonia(24%) achieved the best reductions in 2009 (along with Denmark at 25%). In 2009, for the first time, the EU10 with 18%achieved a better year-to-year reduction in road deaths than the EU15 with 8%.

The adoption of the quantitative target in 2001 has proved to be a turning point in motivating countries, in particular those facing the greatest challenges, to reduce the numbers of people killed on the roads. Now it is the time for the EU to adopt ambitious but achievable quantified targets for reducing deaths and serious injuries by 2020.

In addition to the 35,000 people killed in road collisions in the European Union, about 1,700,000 people are recorded as injured in police records each year, among them 300,000 seriously. Road deaths represent only the “tip of the iceberg” of traffic collisions. For every road death in the EU, at least 44 road injuries are recorded, of which 8 are serious. Yet, although serious injuries tend to be better reported than slight, not all serious injuries are recorded by the police. EU comparisons are hampered because both the levels of injury reporting and national definitions of a serious injury vary greatly among countries. The magnitude of under-reporting undermines proper allocation of resources to preventive measures. Improving the quality of data about seriously injured survivors of road collisions is key to designing more effective safety policies. The EU Road Safety Action Programme 2011- 2020 should include challenging targets for the reduction of seriously injured people alongside a target for continued reduction in deaths. At the same time, the EU should work towards the adoption of a common definition of serious injuries to foster EU comparison. In parallel, Member States should improve the recording of serious injuries by making use of both police and hospital records.

Tackling the three main killers on the roads

Speeding, drink driving and failure to wear a seat belt are the three main risk factors on the road. Measures to tackle these dangerous behaviours behind the wheel have been at the core of road safety policy for decades and significant progress has been made since 2001. Data from the countries that monitor mean driving speedsin free-flowing traffic show that drivers have slowed down appreciably since 2001. Best progress has been made on motorways, where ‘only’ up to 30% of drivers now exceed the speed limit. Unfortunately, speed violations are still up to 70% on rural roads and as many as 80% on urban roads. Deaths attributed to drink drivinghave decreased somewhat faster than other road deaths since 2001 in the EU. However, a massive underreporting distorts the real picture: it is estimated that alcohol related deaths make up to 25% of all road deaths against 11.5% according to official statistics. Although obligatory in all Member States, seat belt usein the EU is estimated to be only 88% for front seats and as low as 72% for rear seats. Some progress has been made, but wearing rates are still disturbingly low in many Eastern and Southern European countries. France, Germany, Sweden the UK and the Netherlands have the highest seat belt wearing rates, 95% and higher, for drivers and front seat passengers, while in Hungary, Slovakia, Greeceand Italy rates are below 80%. For rear seat passengers the disparities between countries are much bigger: from over 80% in Germany, Finland, UK, France, Spainand the Netherlands, all the way down to under 30% in Cyprus, Greece, Malta and Latvia. There is a huge potential in addressing these three longstanding areas of road safety. The EU Road Safety Action Programme 2011-2020 should provide a strong case for fighting speeding, drink driving and the failure to wear a seat belt. It should encourage all Member States – and provide support for those facing the greatest challenges – to monitor indicators of these behaviours. The EU should also adopt the Cross Border Enforcement Directive to address speeding in the EU without delay. Member States should be prioritising road safety measures, including stricter laws, more stringent enforcement and educational campaigns, tackling the three main killers on the roads and should set themselves targets for desirable compliance levels.