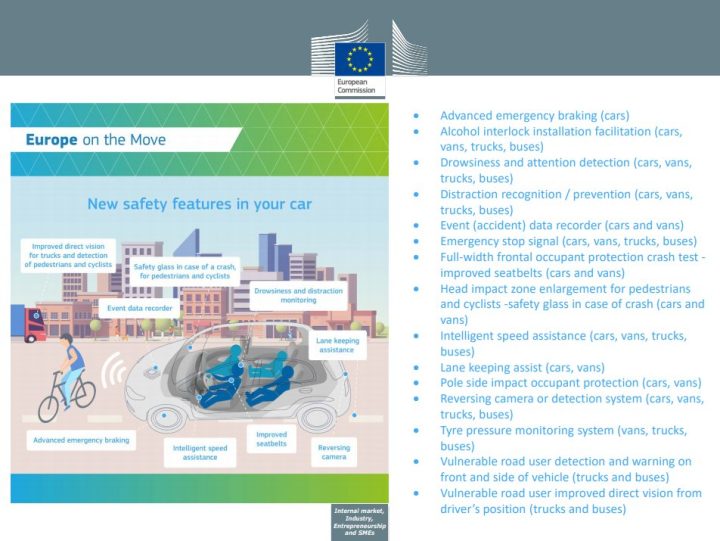 A group of safety experts, consumer groups, transport police, environmental campaigners, city authorities, cyclists and road collision victims have written today to members of the European Parliament’s Committees on Internal Market and Consumer Protection (IMCO) and Transport (TRAN) to raise concerns over the European Automobile Manufacturers’ Association (ACEA)’s attempts to weaken the European Commission’s proposals on new vehicle safety measures and to ask MEPs to pass the legislation as soon as possible, to maximise its life-saving potential.

Dear Members of the Committee on Internal Market and Consumer Protection (IMCO),

Dear Members of the Committee on Transport and Tourism (TRAN),

Dear delegates of the Member States,

We are writing to express our concern over claims put forward by European vehicle manufacturers, represented by ACEA, in an attempt to weaken the European Commission’s proposal to revise minimum vehicle safety standards in the EU (the General Safety Regulation).

The Commission’s proposal includes a number of ‘passive safety’ improvements, to ensure that passengers in the vehicle, as well as other road users outside the vehicle are physically protected in the event of a collision. ACEA argues that ‘active safety measures’ should “take priority” over passive safety measures claiming that more crashes will be avoided in the future thanks to driver aids such as Automated Emergency Braking (AEB) and, further in the future, automated cars.

While technologies such as AEB are to be welcomed, they are not 100% reliable: no automated system is.  Driver assistance systems can fail e.g. because of sensors missing an object or person, and even fully autonomous vehicles, when they eventually appear, will still crash. Some collisions will be unavoidable due to the behaviour of other road users, infrastructure failings, or other, unforeseen causes.

The ‘passive safety’ measures included in the Commission’s proposal should be fully supported by the European Parliament, and not deprioritised as suggested by ACEA.

The Commission proposal includes direct vision requirements for trucks and buses, which would mean automotive companies sell vehicles where the driver can see more of the road space around their vehicle. “Direct vision” is the term given to what drivers can see directly through the windows of their vehicle. This is different to “indirect vision”, which is what a driver sees on a monitor or in a mirror. ACEA claims that a sensor system that detects cyclists or pedestrians is more effective. Seeing something “directly” though has been proven to increase reaction speeds by 0.7 seconds. In practice, improving reaction speeds by 0.7 seconds means a reduction of 5 meters in stopping distance if a vehicle is traveling at 25 km/h. 5 meters of additional travel before stopping can be the difference between life and death.

Furthermore, surveys have shown that cyclists and pedestrians feel a greater sense of safety when they can make eye contact with truck drivers. This is a more effective safety solution than only having sensors, as sensors can be ignored or require time to identify the source of the alert. Sensors have a key role in improving truck safety, most importantly in areas of the truck where direct vision is not possible.

Intelligent Speed Assistance: why does ACEA not back a technology currently being sold by a majority of its members?

One of the technologies proposed for mandatory adoption by the European Commission is a form of overridable Intelligent Speed Assistance (ISA).  The system, in the form proposed, is expected to reduce deaths by 21%.[1]

A majority of ACEA member companies now offer ISA on selected vehicles, including on popular models such as the Ford S-Max and most Volvo models.[2]

ACEA says that ISA should only be considered for mandatory adoption when “new solutions”, such as “short-range communications“ between infrastructure and vehicles, are in place.  ACEA says existing road sign recognition technology and digital maps are not reliable enough.

This argument doesn’t stand up to scrutiny for several reasons.  Firstly, these systems are already on the market.  A recent test by ADAC in Germany found Ford’s version to be accurate 90% of the time. The proposed system would be overridable, so that drivers would not find themselves unable to go faster when an incorrectly low limit was being, exceptionally, applied by the vehicle.

Secondly, car manufacturers universally agree that fully-automated cars will be on the market in the near future.  One of the most basic functions of an automated car will be that it knows, and does not exceed, the speed limit at all times.  The need for such compliance has just been confirmed at a world level by UNECE in its recently-approved Resolution on the deployment of highly and full automated vehicles in road traffic. Vehicle manufacturers surely have a strong incentive, and the capacity, to develop the required effectiveness further before the coming-into-force of the proposed legislation.  Ford’s system was launched in 2014, so even it, with 90% accuracy cannot represent today’s state of the art.

Vehicle manufacturers are also claiming that ISA presents a liability risk. In fact, the intervention of an ISA system (which, in any case, can be overridden) is no more than what drivers currently encounter from devices such as ABS, ESP, lane-keeping support, cruise control etc. With all these devices, as with ISA, the driver remains in control of the driving task.

According to analysis carried out for the European Commission by TRL, the UK transport research laboratory, the proposed vehicle safety measures could prevent 25,000 deaths and 140,700 severe injuries across all vehicle categories between 2022 and 2037. A notable feature of that analysis was that it was deliberately conservative: at every step, the low end of the range of estimated safety benefits was selected, so that the benefits may turn out to be considerably higher.

Intelligent Speed Assistance, as a technology, shares a number of components with lane-keeping systems and automated emergency braking – all three of which are included in the Commission’s proposal.  Cherry-picking from the technology package would undermine the cost-effectiveness of the proposed legislation and its life-saving potential.  The package together provides multiple protections against the occurrence of individual crash types, thus ensuring that even when one system is not effective in a particular instance, the potential victims can still be protected from harm. Delaying some elements of the package to later dates will also be more expensive in the long run.

In 1994-95 ACEA attempted to delay the adoption of the Offset Deformable Barrier for the EU frontal impact crash test standard and similarly tried to weaken the proposal for side impact testing. Fortunately, they failed and both were applied from October 1998, contributing significantly to the subsequent reduction in car occupant deaths.

When the Euro NCAP consumer testing programme was introduced in 1997, it was strongly criticised by leading car manufacturers, who claimed the crash tests were so severe that it would be ‘impossible’ to achieve four stars.  Just five months later, the Volvo S40 became the first car awarded four stars.

The proposal put forward by the European Commission in May 2018 represents a major step-forward for vehicle and road safety in Europe. We urge the European Parliament and Member States to give it their full support and to prioritise this file so that a revised regulation can enter into force in 2019.

Over 25,000 people die on roads every year in the EU. The General Safety Regulation plays a major role in improving road safety and saving lives. Europeans deserve safer vehicles and this should be reflected by Members of the European Parliament and national Ministers ensuring that safer vehicles enter the market as soon as possible.