Ireland is the winner of this year’s European Transport Safety Council Road Safety Performance Index (PIN) award.  The annual award is presented to a European country that has demonstrated continued progress on road safety combined with a strategic approach to tackling the problem across government.

The award will be presented to Shane Ross, the Irish Minister for Transport, Tourism and Sport at an event in Brussels later today (Wednesday 19 June).

Ireland was the second safest European Union Member State in 2018, in terms of road mortality (road deaths per million inhabitants) and has moved up five places in the ranking of EU countries since 2010 when it held 7th place.  In terms of numbers killed, Ireland has cut annual deaths by more than 30% since 2010.   By comparison, deaths increased in other relatively safe countries over the same period including Sweden and the Netherlands.

According to ETSC, Ireland’s performance has been driven by the establishment of a specific government road safety agency (Road Safety Authority – RSA), a long-term strategic plan to cut road deaths with specific targets, regular evaluation and follow-up, and a multi-agency approach to delivery across government.  In recent years considerable efforts have been put in place on tackling dangerous speeding, as well as drink-driving.

“Ireland has made great progress on road safety in recent years, while at the same time recognising areas where it still needs to do more – such as improving the safety of cycling.  What stands out is the strategic approach: analysing the data, setting targets, and making sure the job gets done.  If every country in Europe could get to the same level of safety as Ireland, we could cut road deaths by 40%.  As it is, many countries are standing still and even going backwards.  We can learn a lot from Ireland’s approach – it’s a model for the European Union.”

Progress in Ireland stands in contrast to relative stagnation in the EU as a whole.  The numbers killed on EU roads fell by just 1% last year, and by just 4% over the last five years, according to the latest ETSC Road Safety Performance Index Annual Report – published today.

The EU target to cut road deaths in half over the decade to 2020 now looks out of reach.  Meeting that target would require an unprecedented 21% reduction per year in 2019 and 2020.

In many Member States, road safety has been deprioritised in recent years, with cuts to traffic police enforcement, and a failure to invest in safer infrastructure.

The EU’s biggest and boldest recent road safety initiatives – an update to minimum vehicle safety standards and a significant increase in the scope of infrastructure safety management rules – were only finalised in the last 12 months, after several years of delay. These welcome new measures will also take several years to take full effect.  ETSC is calling on the new European Parliament and Commissioners to make road safety a priority from day one.

At today’s ETSC event in Brussels, the European Commission is expected to announce the publication of a Road Safety Policy Framework for the period 2021 – 2030.

The publication, which is a non-binding “staff working document”, is a follow-up to an action plan published in May 2018 and will give an indication of future policy initiatives, including a set of key performance indicators for EU Member States on issues including speeding, drink driving and distraction.

Road deaths and injuries in the EU are still unacceptably high by any measure, with around 500 deaths every single week, the equivalent to three Boeing 737 planes crashing and killing everyone on board.

“Over the next few weeks and months, newly-elected MEPs will be taking up their posts at the European Parliament and new European Commissioners will be appointed, together with Presidents of the three main EU institutions.  It’s essential that the new leadership maintains the level of ambition on tackling road safety that we have seen from the EU over the last year – they must not sit on their hands.” 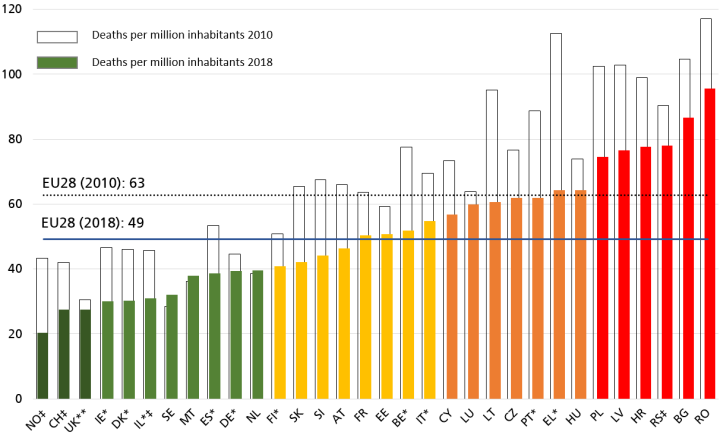 Mortality (road deaths per million inhabitants) in 2018 (with mortality in 2010 for comparison) in countries measured by the ETSC Road Safety Performance Index (PIN) programme. ‡Non-EU countries that participate in the ETSC PIN programme *National provisional estimates used for 2018, as final figures for 2018 are not yet available at the time of going to print. **UK data for 2018 are the provisional total for Great Britain for the year ending June 2018 combined with the total for Northern Ireland for the calendar year 2018.