Deaths of cyclists in the EU have fallen eight times more slowly than deaths of motor vehicle occupants since 2010, according to the European Transport Safety Council (ETSC), authors of a new report. (1)  ETSC is calling for urgent action to ensure that sustainable modes of transport such as walking and cycling, are made much safer.

The latest figures show that there were at least 51,300 pedestrians and 19,450 cyclists killed on EU roads between 2010 and 2018.  The researchers found that while deaths among motorised vehicle occupants fell by, on average, 3.1% a year over the period, deaths among cyclists averaged only a 0.4% annual reduction – eight times slower.

The slow decline in cyclist deaths reflects both an increase in levels of cycling in several EU countries, but also the failure by the EU, many governments, local authorities and motor vehicle manufacturers to invest more heavily in measures to protect vulnerable road users.

Deaths among pedestrians and cyclists, the most vulnerable road users, accounted for 29% of all recorded road deaths across the EU in 2018. (2)

99% of pedestrian deaths, and 83% of cyclist deaths recorded are as a consequence of an impact with a motor vehicle. (3) These groups are, by far, the least likely to harm other road users.

The research revealed that half of all cyclists and pedestrians that die on EU roads are over the age of 65.  Older people are more fragile and less able to recover from serious injuries.  However, Europe’s aging population needs to stay active and mobile for reasons of health and wellbeing.  ETSC says the challenge is how to improve safety while walking or cycling, particularly for high-risk groups such as the elderly and children.

The report recommends applying a hierarchy for urban planning that prioritises walking, cycling and public transport over private car use, as well as 30 km/h limits supported by traffic calming infrastructure and by enforcement in areas with high levels of walking and cycling.

The authors are also calling on the EU to channel funds into road safety improvements such as the infrastructure modifications needed to support safer city streets and to come forward with a strategy on safe active mobility.

ETSC also wants to see improved data collection because  many deaths and serious injuries of cyclists and pedestrians still go unrecorded, as well as Key Performance Indicators to track progress across the EU on improving safety for these groups.

“The EU is facing a multitude of challenges: the climate emergency; road deaths and serious injuries; air pollution and obesity.  Policies that improve the safety of cycling and walking can also make a major contribution to tackling all these challenges.  Some EU countries, the Netherlands and Denmark in particular, are showing the way forward.  If they can do it, so can the rest of the EU.“ 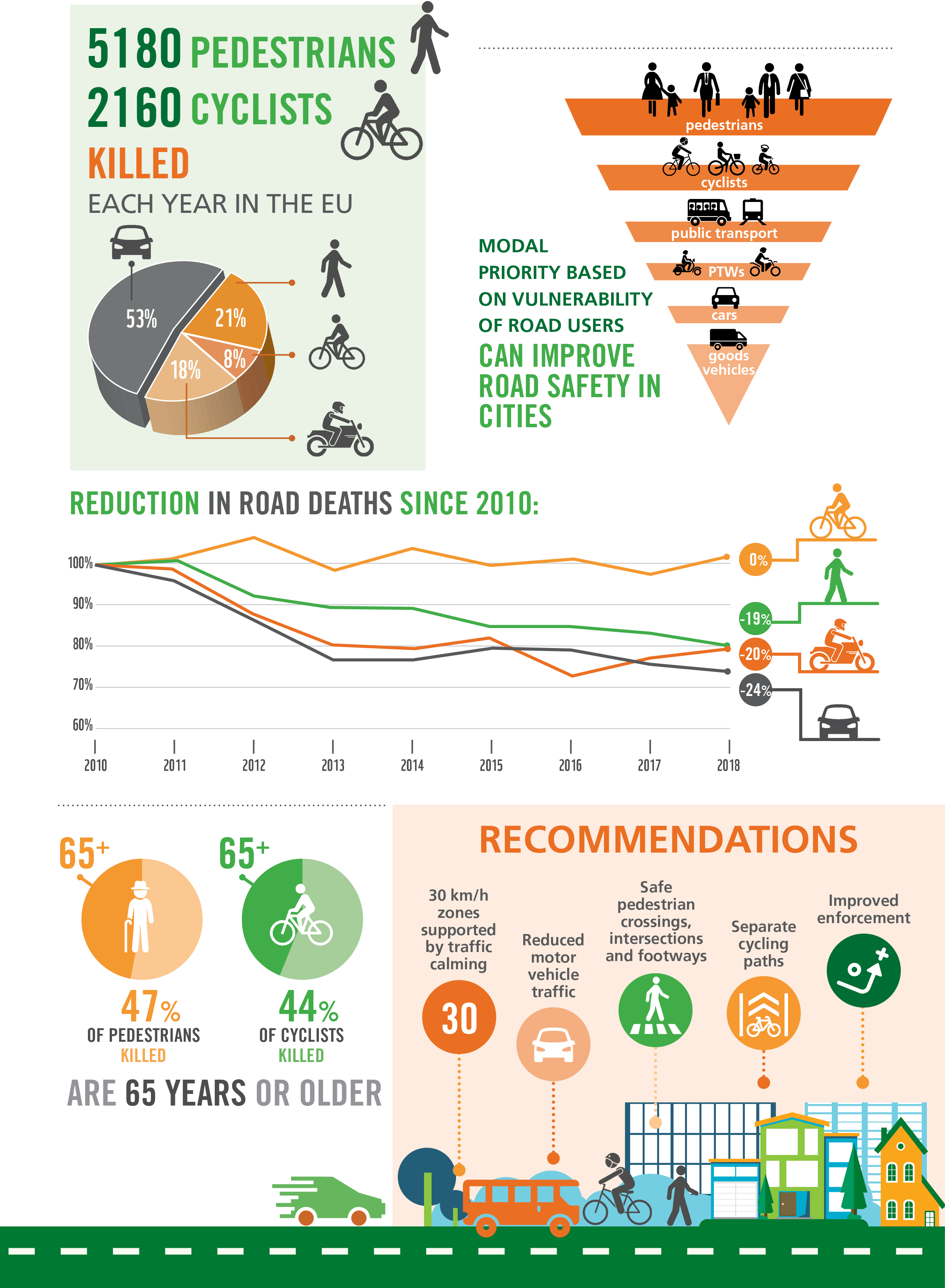 Reduction in passenger road deaths 'not matched by cyclists and pedestrians' https://t.co/qJVsxnfXx7