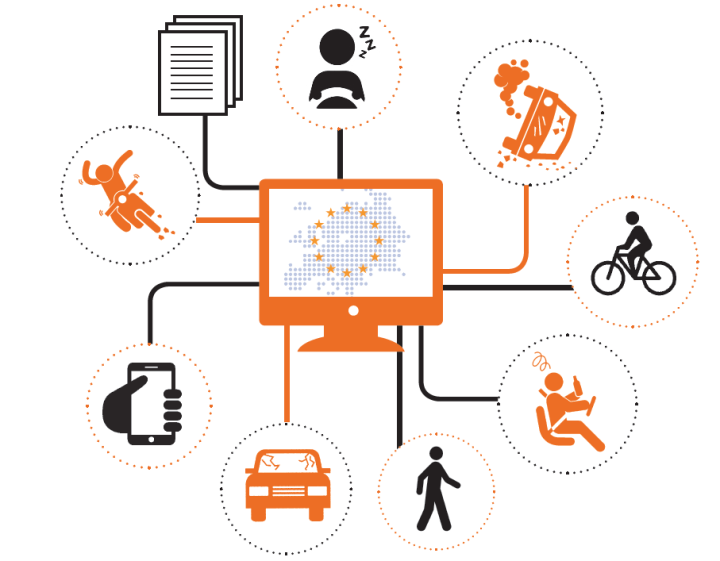 In all PIN countries the primary source of road death data collection consists of police records. Police data are, and should remain, the primary source of road death analysis. However, police resources are limited and increasingly under pressure from other tasks. There are also certain collision scenarios such as those involving non-motorised vehicles or single vehicle collisions where road deaths are more likely to go unrecorded by the police.

The actual number of road deaths can be determined even when not all road deaths are recorded by the police. This can be done by using complementary data sources that may be made available by national statistical offices.[1] Fourteen PIN countries rely on police data only for road death data registration.[2] Eighteen PIN countries link police data with other sources.[3] The most widely used additional data sources are hospital data, death certificates and records of unnatural death.

In general, police records provide an important overview of road death data. However, procedures complementing and linking police data with other sources should be applied in all PIN countries in order to detect changes in recording rates by the police. In addition, linking police and hospital records is essential for improving serious road traffic injury data collection. By improving the reporting rate of serious injuries, the reporting rate for the number of road deaths is likely to improve as well, as people who were first recorded as injured may, sadly, later die within 30 days.[4]

Experts from the great majority of the PIN countries consider that road death data collected in their countries by the police are accurate, even when procedures complementing police data are not in place. Yet some experts agree that certain road deaths might go unrecorded by the police in particular those following single bicycle collisions or bicycle collisions with pedestrians. As active travel is being encouraged, the number of collisions involving vulnerable road users might be increasing.

Countries that complement police data with alternative sources have different approaches. For example Sweden has a unique road death and injury information exchange system (STRADA) which facilitates information exchange between the police and hospitals under one platform, and a responsible authority – the Swedish Transport Agency – manages the database. In some countries, for instance Belgium, Finland, Germany and the Netherlands the National statistical offices and in Spain the Directorate General for Traffic, and not the police, are responsible for capturing the number of road traffic victims who died within 30 days by complementing police data with alternative sources.

This report also shows that, in the countries which could provide data, more than half of killed road users are recorded as dying at the site of a collision. But there are large differences between countries and there might be many possible reasons for this, including differences in the procedures or quality of the emergency services and hospital care. A high proportion of road deaths at the site might indicate lower reporting rates of deaths at a later date as underreporting can be related to deaths that occur later after a collision. These differences are difficult to interpret and should be further researched.

Official alcohol-related road death numbers based on police records are under-reported in a number of PIN countries as not all drivers, let alone all active road users, involved in fatal collisions are systematically tested for alcohol.

Drug-driving remains significantly less well understood than drink-driving. Some PIN countries already have legislation in place to allow the police to drug-test road users. Yet the scope of drug-driving deaths remains unknown as not all drivers or riders involved in fatal collisions are tested for drugs.

[4] The EU definition of a road death: any person killed immediately or dying within 30 days as a result of a road collision.