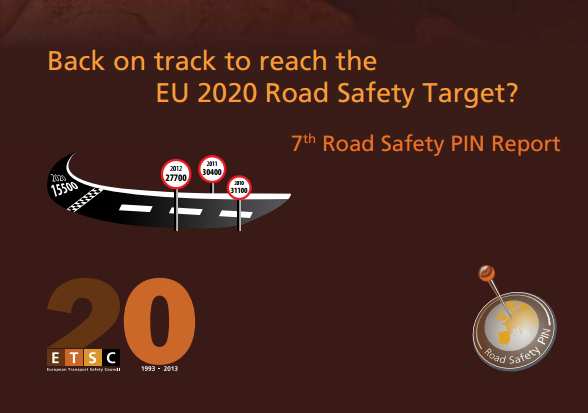 A total of 27,700 people were killed in the EU27 as a consequence of road collisions. Around 313,000 were recorded as seriously injured and many more suffered slight injuries.

Following disappointing results from 2011, the year 2012 brings a welcome contrast as 27 out the 31 countries monitored by the PIN Programme registered a drop in the number of road deaths. Frontrunners are Malta and Cyprus followed by Israel and Denmark. But road deaths increased in Switzerland, Luxembourg, Lithuania and Romania.

There have been 2,661 fewer road deaths in 2012 than in 2011 in the EU as a whole. The monetary value of this reduction is estimated at 5 billion Euro. For the EU to be reaching the 2020 target through constant annual progress, another 600 deaths would have had to be saved over the 2011-2012 period.

At the moment, the prospect for achieving the EU 2020 target is seen as achievable by all Member States, if they continue their sustained efforts and show political will to invest in road safety. Important safety measures are still to be implemented fully or are being developed.

The European Commission presented its ‘First Milestone towards an injury strategy’ in March 2013 as the first step towards coming up with a strategy. ETSC welcomes the adoption by the European Commission of a common EU definition of seriously injured casualties as in-patients with an injury level of MAIS 3 or more. Each Member State should work towards adopting the MAIS3+ definition and adapting their data collection system.

Since 2001, for the EU as a whole, deaths in collisions involving an HGV and in collisions involving a bus or coach were reduced at a somewhat faster pace than the overall number of road deaths, with average annual reductions of 6% and 6.4% respectively compared with 5.7% for the overall number of road deaths. However, the number of deaths per distance travelled for heavy goods vehicles, as well as buses and coaches, is larger than the average across the whole vehicle fleet. Because large proportions of those killed in such collisions are non-users of these verhicles, their deaths add an important dimension of externalities to the cost of transport of goods and passengers.8

The chapter underlines that general as well as targeted road safety measures should be combined in order to reduce road deaths in collisions involving these types of vehicle sustainably. These include the enforcement of current legislation, particularly when aimed at HGVs and buses, the promotion and large-scale rollout of life-saving technologies and the training of road users, with a renewed focus on those who drive as part of their work or profession.

Risk on the roads: a male problem? – The role of gender in road safety

On average, in the EU, 90 men are killed on the roads each year per million male population, compared with 27 women per million female population. Across Europe, females have a road mortality rate less than one-third that of males. Hypothetically, if all EU road users used the roads like females in their respective countries do now, the road mortality rate across the EU would be about 20% lower than the average for the SUN countries, and even in the countries with the highest road mortality it would be no higher than it is in Germany now. Males are mainly killed as car drivers and motorcycle riders while females are mainly killed as pedestrians and car passengers.

There is extensive evidence to show that men have a higher rate of collision, as well as more frequently showing dangerous behaviours. Member States and the EU should address the myriad of differences between men and women, by recognising them and developing gender-differentiated policies in relevant areas.