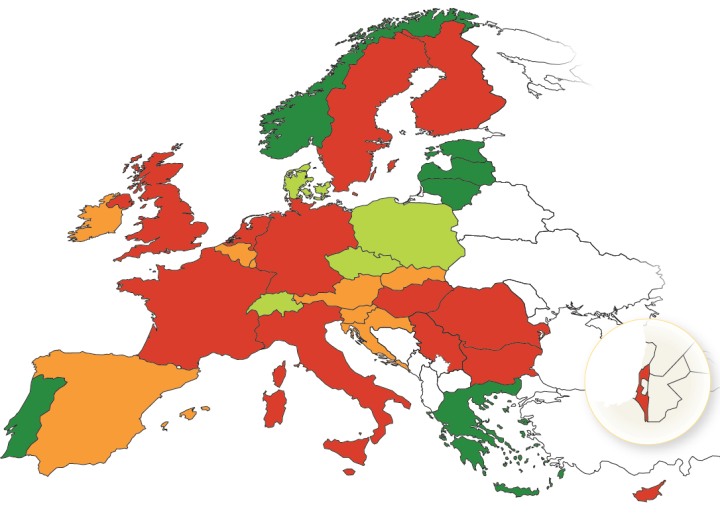 Out of the 32 countries monitored by the PIN Programme, 22 reduced road deaths in 2017 (Fig.1). The best results were achieved by Estonia with a 32% decrease, Luxembourg with 22%[1], Norway with 21% and Slovenia with 20%. Road deaths increased in eight countries, while progress stagnated in Slovakia and Lithuania.

There has been progress over a longer period but it is not enough to meet the 2020 target. Since 2010, EU countries achieved an overall reduction in road deaths of 20%, which equals a 3.1% annual average reduction. A 6.7% year-to-year reduction was needed over the 2010-2020 period to reach the 2020 target through constant progress in annual percentage terms. This reduction was not achieved, so the EU must now reduce the number of road deaths by 14.5% each year between 2018 and 2020 to be on track for the target. Time is running out; the target is now highly unlikely to be met. Strong political will and urgent measures are still needed in all EU Member States to narrow the gap between the desired and the actual EU progress. Increased traffic law enforcement and treatment of high risk sites are among the measures that can have an immediate positive road safety effect.

On 17 May, the Commission published a Strategic Action Plan on Road Safety that includes a new long-term target to halve road deaths by 2030 as well as, for the first time, a target to reduce serious injuries by the same proportion. EU Member States called for such targets last year in the Valetta Declaration on road safety[2], following years of campaigning by road safety and victim groups. The Strategic Action Plan on Road Safety came as part of a large package of transport policy proposals known as the ‘Third Mobility Package’.[3] The package includes new vehicle safety standards; updated rules on road infrastructure safety management and a strategy for automated driving. Importantly, the European Commission proposed a package of new vehicle safety standards that could, by themselves, prevent more than 2000 road deaths every year by 2032, ten years after the measures come into force. It is now up to EU Member States and the European Parliament to give their backing to the plans and not give in to pressure from car manufacturers, who are already attempting to weaken parts of the vehicle safety proposal, or from others who may oppose aspects of the package. While the EU target of halving road deaths between 2010 and 2020 is now unlikely to be met, this long-awaited impetus from the European Commission could contribute significantly to resuming improvement soon and driving progress in the next decade.

Seven PIN countries[4] have started preparing national road safety strategies for the upcoming decade. Achieving the full potential of existing and new measures based on the safe system approach will be essential to future progress.

[1] The numbers of road deaths in low population countries such as Luxembourg are particularly small and, therefore, subject to substantial annual fluctuation.