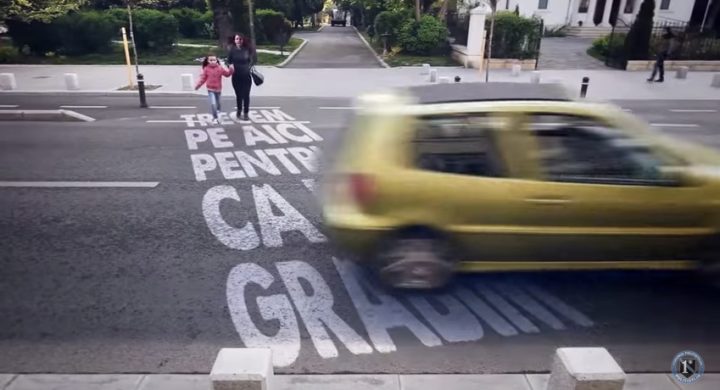 A new campaign video from Romania urges pedestrians to find a safe place to cross the road.

Prior to making the film, an opinion survey was carried out asking people why they chose to cross at dangerous locations. The excuses given such as ‘I’m in a hurry’ and ‘I’m impatient’ are shown painted on the road instead of zebra crossings. The campaign, which translates as ‘Don’t cross over (to the other side) – Choose Life’, was produced by the Romanian traffic police.

40% of all Romanian road deaths are pedestrians – the highest rate in Europe.

ETSC’s latest report on cycling and pedestrian safety recommends encouraging local authorities to introduce 30km/h zones in residential areas and areas used by many pedestrians and cyclists. This is already happening in a number of countries. The German government announced in May it would make it easier for local authorities to introduce 30km/h zones near schools on main roads.

The report also says urban planning should be based on a hierarchy of road users where pedestrians, cyclists and public transport are prioritised.