A third of road deaths in the EU are caused by collisions that involve a single motorised vehicle where the driver, rider and/or passengers are killed but no other road users are involved. These single vehicle collisions (SVCs), and how to prevent them occurring, are the subject of this report.

Over 60% of deaths in SVCs occur on rural roads. However, safer infrastructure and appropriate speed limits have helped reduce deaths on rural roads.

Young drivers and riders are at a greater risk of becoming involved in fatal single vehicle collisions than any other road user age group. This risk is twice as high for the 18-24 age group compared to the 25-49 age group.

Data available from a few countries suggest that the range of casualty characteristics vary from country to country but the most common fatal SVC scenarios are the vehicle leaving a straight road or leaving the road when driving on a bend.

An in-depth study conducted in the Netherlands in 2011 found that distraction was the most frequent contributory factor related to human behaviour, involved in 31% of the SVCs studied. This was followed by speeding (27%), alcohol use (19%) and fatigue (17%). Young drivers appear to be involved in SVCs when distracted, choosing inadequate swerving manoeuvres to avoid another road user/object or when they incorrectly assess the traffic situation. 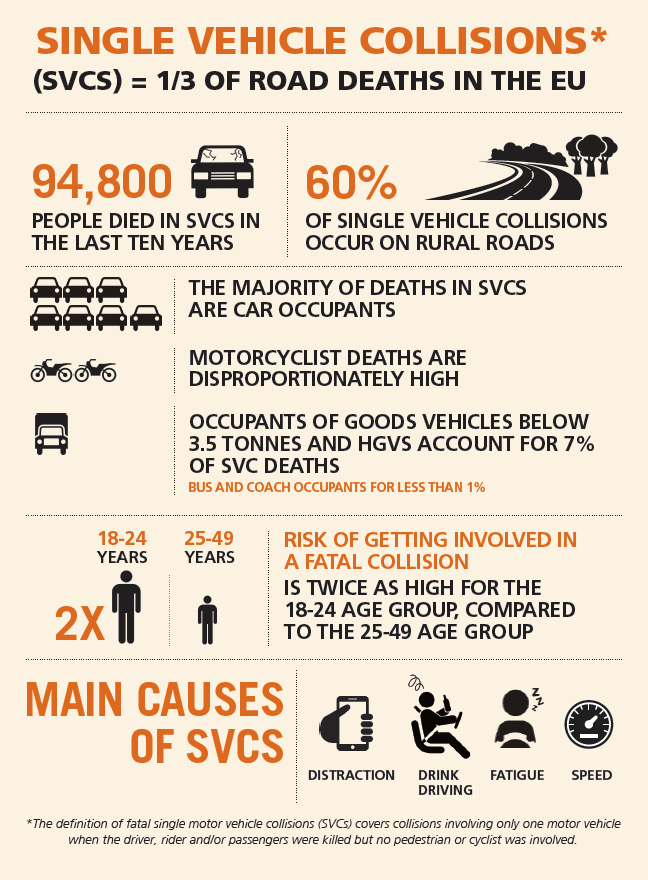