Road safety is not always easy: the city of Brussels must stick with its ‘Good Move’ plan

Road deaths in Slovenia were reduced by 42% between 2010 and 2020, decreasing from 138 deaths to 80. A significant reduction of 22% occurred in the pandemic year 2020 compared to 2019. With 38 deaths per million inhabitants, Slovenia ranks among the well performing countries in terms of road mortality, above the EU average.

– 2010 change in drink-driving penalties with higher sanctions and higher number of penalty points added on the driving licence;

– 2017 law modified for offenders with a BAC above 1.1g/l: The police can now decide between fines, penalty points and prison (for a maximum of 12 hours but not less than 6). If the police does not take the offender to prison then the offender has to find a solution himself (call someone to pick him up, walk, or sleep in the car ….)

To see all the measures taken at national level to tackle drink-driving, check the timeline on the full report here

The legal BAC limit for standard drivers is 0.5g/l

The legal BAC limit for novice (up to 24 years old) and professional drivers, is 0.0g/l

Alcohol tests are done systematically in practice for all active participants of a road collision.

Since 2011 rehabilitation courses have been provided to drink-driving offenders. It is up to the court to order an examination by a doctor. No alcohol interlock programme is in place so far in Slovenia, although the measure was under consideration in 2016. Discussions are still ongoing on the potential adoption of the technology to fight against drink-driving.

Based on the National Road Safety Programme 2013 – 2022, a national campaign on drink-driving is organised every year. The campaign is carried out in June, November and December. Preventative campaigns are managed and coordinated by the Ministry of Health and the Slovenian Traffic Safety Agency. The purpose of these campaigns is preventing drink-driving, reducing road crashes indirectly caused by alcohol abuse, and promoting an integrated approach to the problem of hazardous and harmful drinking. A few preventative events were organised with the cooperation of police and NGO’s (near popular pubs and clubs) where young drivers were able to test their driving skills on demo equipment and try breath tests. Short videos to raise awareness on drink-driving were also promoted. Below is one of the latest, from 2018. 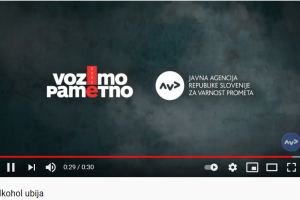 The 2020 campaign was entitled “Slovenia is blowing 0” and took place during the Christmas holidays. Drivers tested by the police that were shown to be sober received tickets for the traditional annual concert of the Police orchestra. 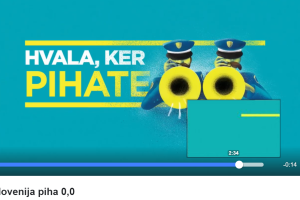