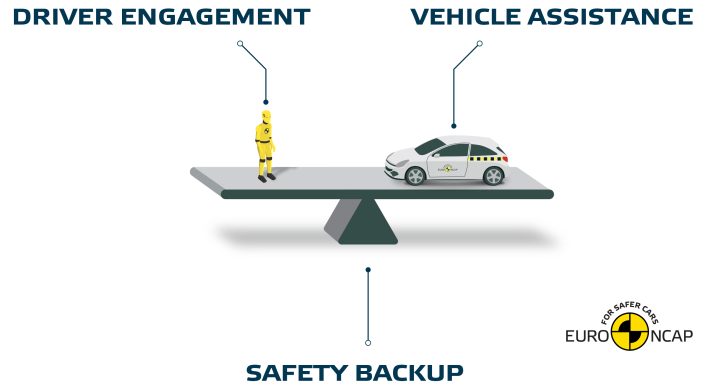 Euro NCAP has launched a new rating scheme for driver assistance systems fitted to the latest generation of vehicles, including advanced cruise control and lane keeping assistance.  Some manufacturers have been criticised for using inappropriate marketing, weak driver monitoring or poor safety backup.

For its 2020 assessment of so-called “highway assist” systems, Euro NCAP developed a dedicated test and assessment protocol, divided into two main areas: Assistance Competence, based on the balance between Driver Engagement and Vehicle Assistance, and Safety Backup.

The systems score points in each of these areas.  But some contribute a greater share of the score than others.  The score in the first two areas of assessment – Driver Engagement and Vehicle Assistance – are compared and the poorer score contributes to the total.  The ‘balancing’ of these two areas reiterates the 2018 Euro NCAP tests which showed that good performance in one area is not helpful unless it is accompanied by good performance in the other.  The poorer of the scores is added to the score from Safety Backup to give a total.  The total scores are then divided into gradings.

Tesla, the brand that has most aggressively marketed its ‘autopilot’ and ‘full self driving capability’ technology, was given a ‘moderate’ rating for its Model 3.  Euro NCAP criticised its misleading marketing materials and the lack of a camera-based driver monitoring system.  The vehicle also received 0 points for ‘driving collaboration’.  However, the car scored maximum points for adaptive cruise control, steering assistance, collision avoidance and the backup function in case of a system failure.  In conclusion Euro NCAP said “the Tesla Model 3 excels in the level of Vehicle Assistance but fails to balance that high level of support with a similar level of Driver Engagement leading to possible overreliance”.

Vehicles from Audi (Q8), BMW (3 series) and Mercedes (GLE) scored the highest, according to the new testing system – achieving ratings of ‘very good’.  The Nissan Juke was awarded a ‘moderate’ rating, along with the Tesla. The Renault Clio and Peugeot 2008 managed only an ‘entry’ rating.  In the latter case, Euro NCAP warned that “in case of an unresponsive driver, the 2008 deactivates the system leaving the vehicle without control”.

In a related development, representatives from the automotive industry have proposed, at the UNECE in Geneva, to regulate Level 2 hands-off lane keeping assistance systems, which would aim to keep the vehicle in the driving lane without requiring drivers to keep their hands on the steering wheel.

A vehicle with such technology would appear to drive itself, but as an assistance system, drivers would remain responsible for monitoring the driving environment as well as ensuring the safe operation of the vehicle, and would be expected to intervene at any moment if required.

With assisted driving, the driver should be required to keep their hands on the steering wheel – with hands-on meaning eyes-on. On the other hand, hands-off would be reserved for automated driving systems, which would clearly signal to the users that they are free to carry out other activities – hands-off would mean permission to take your eyes off the road.

The change of the role from driver to operator in hands-off assistance systems would be accompanied by safety risks, such as mental underload, increased fatigue and reaction times, amongst others.

A report by the Dutch Safety Board has shown the safety risks with hands-on versions of lane keeping assist systems, as drivers were found to be overestimating the system’s capabilities, over relying on them, unaware of the limitations; this led to driver disengagement from the driving task.

The automotive industry says this can be addressed through driver monitoring systems.  But that presumes such systems are completely reliable, meaning that it would not only detect whether drivers have their eyes on the road, but are actually paying attention.  It also presumes that such monitoring systems can cover 100% of the driving population and 100% of driving situations. Hands-off but driver monitored systems would still send the wrong signal to drivers, as it only blurs the difference between an assistance system and an automated driving system still further.