The European Commission has today published data showing that deaths on EU roads fell by just 2% last year, following a similar decrease in 2016 and a 1% increase in 2015.

According to ETSC analysis, the EU target of cutting deaths by half in the decade to 2020 is now very unlikely to be reached. The EU28 collectively reduced the number of road deaths by 20% over the period 2010-2017, far less than the 38% cut needed to stay on course to meet the 2020 target.

Commenting on the publication of the latest figures, Antonio Avenoso, Executive Director of the European Transport Safety Council said:

“ETSC is eagerly awaiting for the Commission to come forward with a package of long-awaited road safety legislation.  We are calling for safer vehicle standards such as mandatory fitment of Automated Emergency Braking (AEB) and Intelligent Speed Assistance (ISA); better infrastructure safety rules and a solid framework for the safe rollout of automated driving within weeks not months. It’s also time to see a new long term plan for the next decade with a clear strategy for halving the number of people that die or are seriously injured on our roads every week.”

Member States also have a crucial role to play in improving road safety, especially with measures that can be implemented in the short term, such as increasing levels of enforcement.  Estonia and Slovenia are examples of EU Member States that have cut deaths rapidly in recent years. 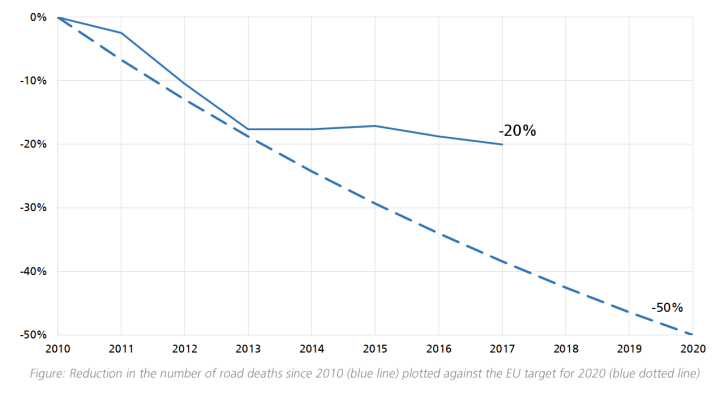