In 2020, 237 people were killed in road traffic in Croatia, 44% fewer than in 2010.  Consequently the country now ranks among the better performing countries, with above average reductions in deaths over the last decade. With 58 deaths per million inhabitants, road mortality in Croatia, however, remains quite high compared to the EU average.

2014 – 2015 – A longer driving ban for a second or third offence committed within two years was introduced. It also became possible to keep the offender in detention for up to 12 hours, in order to become sober again. Imprisonment instead of fines was recommended for reoffenders

2017 – Drivers caught three times or more under the influence of alcohol, can be sent by the police to for further medical examination.  Prior to 2017, this applied only to offenders caught with 1.5 g/l or more, or for those that refused a breathalyser test

The legal BAC limit for standard drivers is 0.5g/l

The legal BAC limit for novice (up to 24 years old) and professional drivers, is 0.0g/l

Road users are not tested if a doctor decides it is too dangerous because of the injuries the victim sustained in a road collision. All road collision participants whose state allows it are breath tested and if the test is positive, blood and urine shall be taken to confirm the level of alcohol. If a road user was killed, blood and urine samples are taken during autopsy. When results come out, data are included in police reports.

In 2018, the Croatian Auto Club (HAK) received funding under the FIA Road Safety Grant Programme for their project “10 Golden Rules”. The project explored several road safety risk factors. The National Road Traffic Safety Program, the Ministry of the Interior, the Croatian Radio-Television and the Academy of Dramatic Arts were involved in the project. 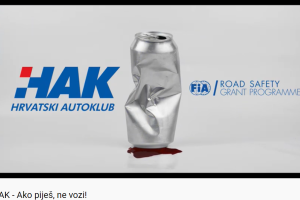